Tales From the Field

If you had been able to walk the lines at Culloden around noon on 16 April 1746, about an hour before the Jacobite cannons opened up, with enough time to ask a few questions about why the rebel soldiers were ranked up there on that frigid and rainy day, you might get a number of different answers.

It could be somewhat difficult to understand some of the responses, as representatives of numerous countries and localities were present on the field, including many native Gaelic-speakers from the rural Highlands and Islands. Murdoch Shaw, standing at the centre of the Jacobite front line, would tell you that he was brought to Culloden by his master, Alexander Macgillivray of Dunmaglass, who served as a leader of Clan Chattan in the Forty-five.1 It was customary for men of stature to bring servants into battle so their horses and baggage could be kept in order, but some of these attendants were also expected to fight alongside them.2 Shaw’s chief would perish in combat shortly after your conversation with him, at just the tender age of twenty-six.3 On the left flank of the Jacobite vanguard, Donald Bain Grant huddles with men from the different clans serving in Macdonell of Glengarry’s regiment. He might describe to you how he was taken forcefully from his home in Corrimony by desperate Jacobite recruiters just the day before, and that he was quickly rushed to Inverness in anticipation of the coming engagement.4

Amongst the clans, hereditary authority largely dictated support for the Stuart dynasty, but this was most often germane to the specific fortunes and well-beings of the clan chiefs themselves. It was part and parcel of the clan system to come out for one’s chief or landlord during times of war, regardless of the reasons for it.5 Many went willingly; some did not. Thousands of Highlanders joined the army of Charles Edward Stuart in the early months of the rising, but it became more difficult both to enlist and to retain Jacobite soldiers as the campaign wore on, necessitating harsher measures and even bribes by recruiting officers.6 Coll Macdonell of Barrisdale’s enlistment drive in Sutherland was supplemented by copious amounts of whisky, which he foisted upon the local populace as enticement for joining the Prince’s army. ‘Colla Ban’ was still recruiting across the Moray Firth at the time of the battle.7 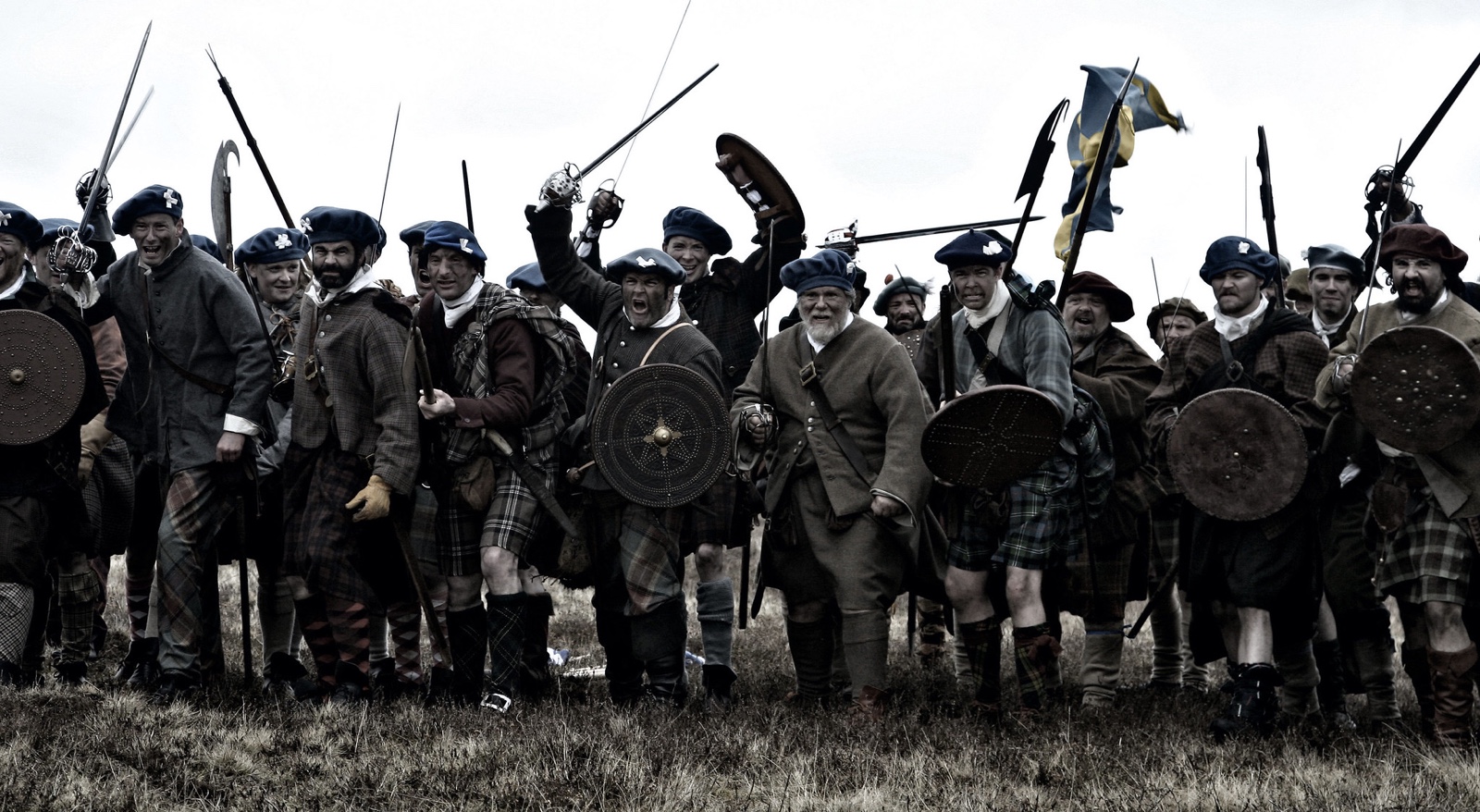 For those who joined their superiors, their contracts of military servitude were seen in similar terms as those of contractual farming, set for a general period of time usually based upon the harvest cycle. The great swathes of desertion within the Jacobite ranks during the autumn harvest and spring plantings bear out the fact that community subsistence and the local economy were the ultimate priorities for many clansmen-in-arms.8 The case was no different with the hundreds of loyalist Highlanders recruited into the Independent Companies for the government forces of King George, some of whom also fought and died here at Culloden – but on the other side of the field.9

Other Gaels were there at Drumossie Moor to defend their way of life. Many went along to preserve their local communities and the very system of clanship itself, which were commonly seen as far more immediate motives than broader patriotic or dynastic causes.10 Some chiefs were tradition-bound to restore the Stuarts to the throne of the Three Kingdoms of Britain and Ireland, and the lineage of Jacobitism ran long and deep within clans like the Farquharsons, Macleans, Stewarts of Appin, and Macdonalds of Glengarry and Keppoch, to name a few. But practical matters were almost always a more vital determinant of Jacobite support within clanship, and their loyalties were by no means split cleanly down the ‘Highland line’. Over one-third of the principal Highland clans abstained from rising at all in 1745-6, and many that did ‘come out’ for the Jacobites were divided.12 An Aberdeenshire minister recorded in 1746 that ‘almost all the common people’ in the north-east were inclined toward Jacobitism due to the financial restrictions imposed upon farming and brewing by the government Malt Tax in 1725, as well as the legal constraints placed upon non-juring Episcopal congregations that were so prevalent in places like Banffshire, Aberdeenshire, and Angus.13 Indeed, the north-eastern counties provided more than half of all martial and civilian Jacobite support during the Forty-five.14

The Lowlands were also well represented. Haddington resident Joseph Forbes, the nephew of an Episcopalian minister, would tell you that he, along with numerous others in the community, was heavily influenced by his uncle’s wishes, as family was exceedingly important to him.15 Glasgow veteran of the 1715 rising, James Stirling, had been too infirm to again join the Jacobite army. Instead he had travelled to Edinburgh, where he had presented his two sons directly to the Bonnie Prince for his use in Lord Elcho’s troop. And now, at his insistence, they stood upon the moor in their father’s place.16 Glasgow might have been mostly loyal to the government, but the Stirlings clearly held to a familial tradition of Jacobite support.

Just as Cumberland’s rearguard troops arrive from their camp at Balblair, some of Thomas Drummond of Logiealmond’s men whisper to you that they have no choice but to stand here, ankle-deep in muddy water. Their own landlord’s factors had ordered every third tenant to ‘use Arms in Support of the Present Rebellion’. All of their cattle and beasts of subsistence had been driven to the next town, where the officers waited to gather the prospective soldiers. Those who arrived late were made to pay a shilling for each horse and six pence for every head of black cattle that was ‘borrowed’.17 And here they now were, perhaps without personal stake in the Jacobite fight, but fighting nonetheless.

William Govan of Drumquhassle flatly disliked the present government, calling them ‘scoundrels’, and the Lancaster shoemaker Jeffrey Battersby states with vigour that ‘no Hanoverian had any right to the Crown of England’.18 Perthshire gardener William Greenhill is heard declaring that King George was ‘an usurper & Adulterer’, but dynastic loyalty had slowed from being the crucial talking point in popular circles well before the Forty-five, however still common it was for pro-Stuart exclamations to be heard amidst protesting crowds and, likely, within the ranks of Jacobite regiments.19

Anti-Union politics was primarily the realm of the monied classes, and by 1745 much of urban Scotland had grown more comfortable with the economic benefits the treaty had engendered in the last forty years, especially in larger port towns like Glasgow and Aberdeen.20 Lingering feelings of financial disaffection did not always translate to Jacobitism, but the Act of Union continued to raise fears for some in both Scotland and England who believed they would be better off breaking free of the terms it imposed. Many tradespeople in Edinburgh wanted a return of Scotland’s parliament to help escape corruption and restore financial salubrity in the capital, but their support for a Stuart restoration was tepid at best.21

Back at Culloden, eighteen-year-old Andrew Johnstone shrugs and says that he had already enlisted in the Scots Greys for service to the government, but his father ‘with Threats & Menaces obliged him to quit’ and instead join up with the Jacobites. Robert Randall, an out-of-work government excise officer from Edinburgh, tells you that he hadn’t held a job in three years, and the six pence per day he sometimes got for his service to the rebels was just enough to keep him from starving. Samuel Weaver, the servant of a linen-draper from Worcester, was left ill in Nairn by his master, whereupon he was robbed by some of the Jacobite soldiers there. Also reduced to starving, he describes to you pitifully how he then ‘crawled to Inverness and agreed to serve the Rebells for necessary Subsistence’.22

Over two-hundred Englishmen in the Jacobite Manchester regiment were left behind at Carlisle and subsequently captured, but soldiers from the piecemeal Franco-Irish regiments and Royal Ecossais formed no less than 7% of the total Jacobite army, and were arguably the only wholly professional units present at Culloden. On loan from King Louis to help distract Britain from its Continental focus in the War of the Austrian Succession, many of them volunteered to journey to Scotland ostensibly to support the Jacobite cause. They, too, had a number of different reasons for actually crossing the Channel.23 Traditional Jacobite ideologies, then, were represented on the field along with the practical realities of civil strife both domestic and foreign.

Not a Static Portrait, But a Jacobite Mosaic

And so we have evidence from numerous ‘regular folk’ hailing from disparate areas who were involved in the Forty-five and who were now facing down the British army at Culloden. They all had their own motivations for being there – or for being compelled to do so – and collectively this illustrates the incredible complexity of the Jacobite movement and the different inspirations carried under its shared aegis. At its end in mid-April 1746, the Jacobite army at Culloden, much depleted from its zenith only three months earlier at Falkirk, consisted of less than 6000 people from Scotland, Ireland, England, France, and elsewhere in Europe. Its ranks were made up of both elites and plebeians together in the same regiments; they were all Jacobites, but rather than being united under a clear, singular cause, most were there in the name of the causes most relevant to them personally and communally. Just as we walk the field today with complicated feelings, politics, and dreams, so, too, did the common soldiers who fought and died at Culloden.

This article first appeared in the May/June issue of History Scotland (Vol. 21 No. 3, pp. 46-47)
as part of its Spotlight: Jacobites column.

Fit To Be Tried