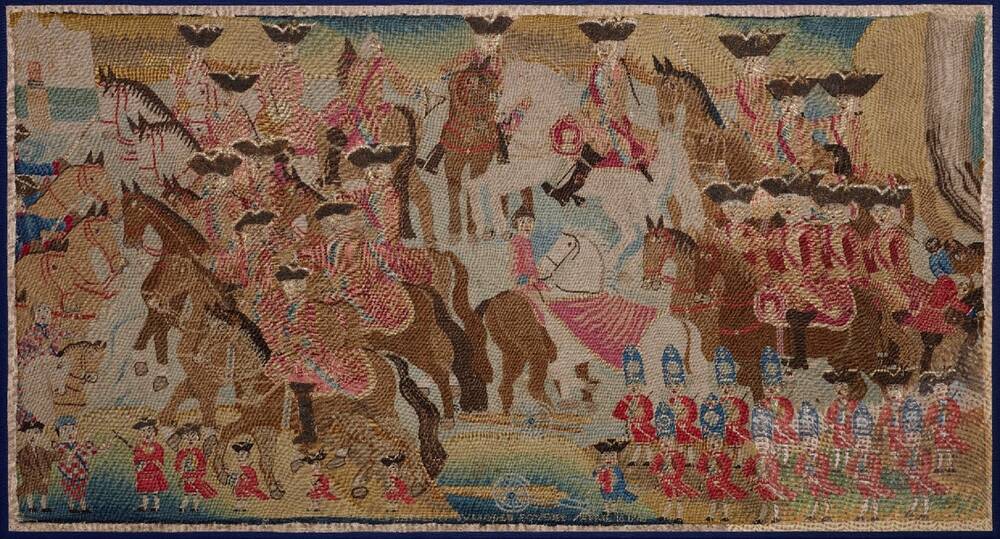 Because history is a series of stories told and retold from different perspectives, indeed often borrowing from past interpretations, it follows that certain snippets of information can be dragged along from version to version like a game of Telephone or Chinese Whispers. If that information has been misinterpreted, misinformed, or mistranscribed at any step in the process, it can have real effects on the integrity of the output that incorporates it. So, to put it simply, historians have to be careful and critical at the same time.

As an instructive example of how the historical timeline can become distorted by errant information through a corrupted lineage of data, we may look to a recent article about a fantastic piece of embroidered canvas that is currently on display at the National Trust for Scotland’s visitor centre at Culloden battlefield. Originally published on the NTS Stories website as part of Black History Month in late October 2020, the article described the likely provenance of the art piece while suggesting that it might feature an eighteenth-century rendition of a Jamaican man at the Battle of Culloden. The image of this man is clearly depicted with dark skin and was described in the article as the servant of an Irish officer called Thomas McNaughton, who was allegedly present at the battle.

Unfortunately, this attribution contained numerous levels of misinformation that can be traced to simple errors that have cascaded down through many years of historical output. Going back to the primary sources instead of relying upon published transcriptions – or digital transcriptions of those published transcriptions! – reveals some significant knots in the thread of the original depiction. To start, Thomas McNaughton was an officer involved in the Jacobite-Williamite wars in Ireland in 1689-90 and there is no evidence available to show that he survived until 1746, let alone that he was present during the fighting at Culloden while employing a Black servant. So how was McNaughton’s name raised in the first place?

My first guess is that the mistake originally stems from an entry in Seton and Arnot’s The Prisoners of the ’45 from 1928-9, which erroneously names the master of a Jamaican servant captured during the Forty-five as ‘Colin McNaughton’.1 After exhaustive searching, there appears to be nobody of import with that name in any other archival documents relating to the Forty-five. Following up on the sources cited by the authors themselves, however, we see they have mistranscribed this man’s name from the original manuscript. The prison returns from which the authors draw quite a lot of their compiled information are currently held at the National Library of Scotland. Taking a closer look at one of these returns, it is clear how they might have misread the eighteenth-century writing: here ‘Collin Mclaughlin’ might appear to some as ‘Colin Mcnaughtin’, who appears along with his servant.

Scanning the returns for other references to any variations of these names and searching more widely for the more suitable Colin Maclachlan (alt. Mclaughlin) provides us with further traction. A later document in the same bundle also lists Maclachlan in a much clearer hand and also links him to Jamaica, though his companion is now conspicuously absent.

After digging around in other archival collections and comparing evidence between them, we start to get a better picture of just who this man was. According to the prison returns, Colin Maclachlan is identified as having had a connection to Jamaica, but rather than being Irish (like Thomas McNaughton), he is noted as having hailed from Argyll. Further government records confirm that he was a surgeon in Jamaica but was active in East Lothian during the rising and was captured upon ‘full proof’ against him. This proof was likely provided by the Wedderburns of Gosford, one of whom was apparently accused of ‘debauching’ McLachlan’s sister!2

The two returns cement the fact that Colin Maclachlan was taken into custody on suspicion for treason by warrant along with his unnamed Black servant on 15 January 1746, and both were subsequently confined in Edinburgh Tolbooth and Edinburgh Castle. The servant was apparently discharged due to illness on 1 March, but Maclachlan’s lone appearance in an ensuing return could be dated as late as 26 April.3 A shown above, he is also present in Alexander Home’s list of Scottish prisoners dated 22 November 1746, though it is not perfectly clear if he was still in custody at that time. His will is dated September 1754, so we know he died somewhere around then.4 If all of this information is accurate, it provides us with a rare example of a Scottish emigre in the Caribbean who had returned to Britain, possibly to take part in the final Jacobite rising.

Oddly, Seton and Arnot also have a brief entry in their register for a Colin Maclachlan, which is derived from these same prison returns and is also linked to Home’s list. This signals that the authors erred by doubling up the same person between sources instead of correctly linking them together as one.5 This kind of oversight is not uncommon within their seminal compilation, which is cited as the definitive source of Jacobite prisoners by many notable scholars. The tools they used to parse out all of this information (‘history sheets’, as described in their 1920s methodology) are obviously nowhere near as sophisticated as what we have available today, however, so it is difficult to blame them too much for the errors.6 Rather, it affords a golden opportunity to refine the historical record of Jacobite participation, which is precisely why the JDB1745 project was created.

Given a rereading of the compiled evidence and now having a better frame of reference for the dates, it is extremely unlikely that either Maclachlan or his servant are depicted in the NTS tapestry if it indeed is meant to represent a scene at Culloden, which was fought on 16 April 1746. With all of this in mind, it makes sense to more closely consider the possibility that the scene could represent another battle like Fontenoy, though it still would not definitively place either of these men there or at any other conflict in the period. Which, of course, opens the door for further conjecture as to who the depictions of those embroidered soldiers really are.

The lesson here is that historical threads are easily frayed over time and that preciseness in critically addressing the lineage of data and sources is critically valuable. The NTS staff were very receptive to my contact and wasted no time in accepting these corrections, republishing the article on 3 November, less than a week after its original appearance. There is undoubtedly much more to the story of the tapestry, but now we are just a bit clearer on framing it in a more accurate context – if it is indeed at all meant to represent an actual moment in history rather than a stylized paean.

Working on my next essay for @HistoryScotland, which takes a closer (and quite gruesome) look at some of the wounds suffered by both British army and #Jacobite soldiers on the battlefields of #The45, as well as their handling in the prisons and infirmaries around Scotland. TMIFTW

Though it’s not the first time a recreation of the Night March on the eve before the Battle of Culloden has been attempted, this time the team at @CullodenNTS are focusing on the developments near the battlefield that threaten its existence.